Aw, man. Truman needs a stocking and I can’t find my notes for the cat stockings. 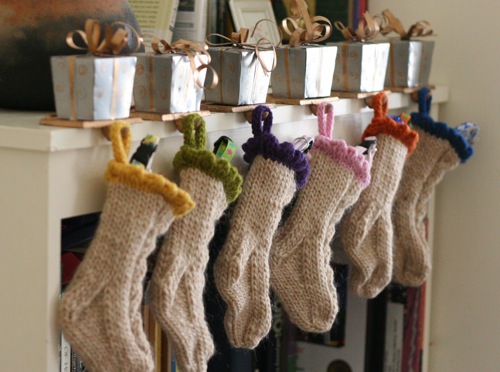 I was going to do them up to be my Christmas Freebie pattern too. I really can’t believe I didn’t put the notes in a post or something when I made the cat stockings. 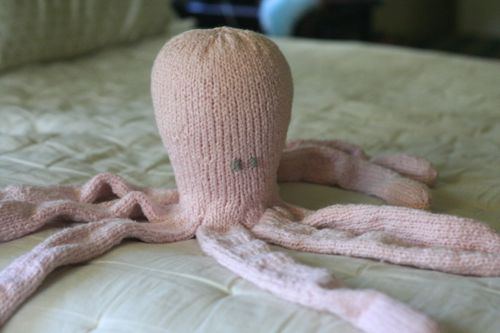 Have you got a second?

Do you think his eyes need to be lower down? And do you think he needs a smiley mouth under his eyes on the pattern example? Ellie’s octopus mouth is on the bottom (where octopus mouths belong) but she is a stickler for realism (and has requested that I make him a siphon so that he can jet through the water properly).

In my original design, I was going to give him some texture (seed stitch) on the bottom of his tentacles. I thought it would look good when he was knotted. I still think it would look good, but I abandoned it as Entirely Too Tedious about four inches into the first tentacle. So I’m pretty sure no one else would want to keep that up for ten feet worth of tentacle, so I don’t think I’m going to include a seed stitch option in the pattern (makes it less confusing to leave it out). Does anyone see leaving it out as a problem? I *could* include the pattern lines in a box or something off to the side if anyone is into that kind of self-loathing behavior…

I just ordered the yarn for a GIANT version (so much pink yarn) for my customer who wants one for Christmas (which is why I’m working on the Octopus now instead of what I said I wanted to do) and yarn for the pattern version. I’m going to give Malabrigo Organic Cotten a try (worsted held double). The color is named ‘ultramarine’. You see how I just couldn’t say no to that. 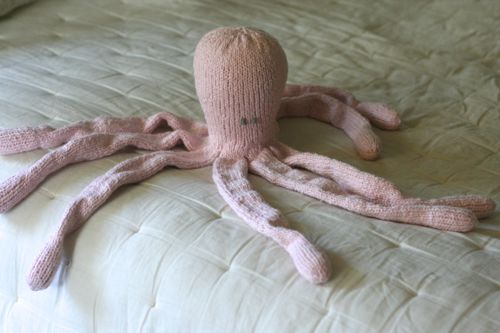 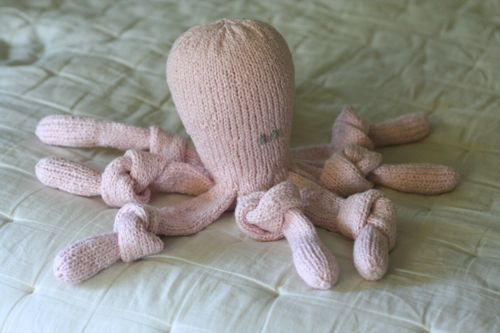 I think I want him a little skinnier at his skinniest point. It doesn’t seem like his body has quite enough shape to it (even though his head protrudes in the back a bit). But generally speaking, I’m pleased!

And it wasn’t a super giant pain even with all those legs! YAY.