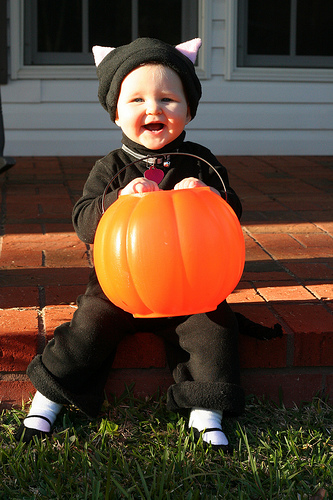 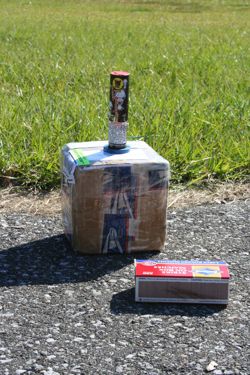 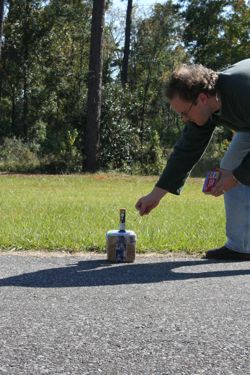 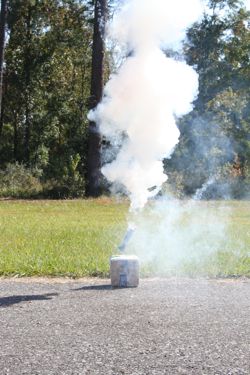 That didn’t turn out to be the beautiful fountain of sparks that I wanted it to be. But the smoke and bang were pretty impressive. And I took a picture of my foot while Michael was lighting the match.

All the excitement means that Dish Rag Tag:the Sequel is officially over! Box 23 belongs to the Gold Medal Knitters! It arrived Wednesday from Stephanie. 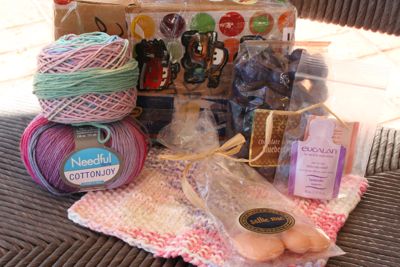 CottonJoy is a wonderful name for a yarn.

I didn’t know that Eucalan came in samples (seriously cute and tiny). In case you were wondering: chocolate covered blueberries are as delicious as their name implies! Stephanie’s pink and purple dish rag for Captain Cate makes me think of a Valentine. Beautiful knitting, Stephanie! And thank you very much for the treats.

Our final box is a little singed on top from the pyrotechnics. But after it’s harrowing stall early in the race, a little black powder residue won’t even cause the Rag Tag Bunch to bat an eye! 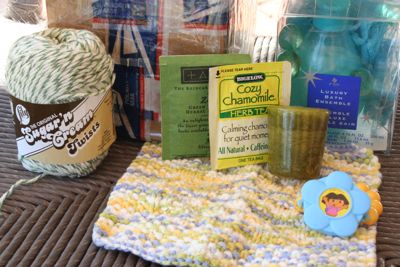 Carmen, who packed this lovely box, would like you all to know that the Rag Tag Bunch has not finished last in 2008, but first in 2009. How’s that for positive attitude and indomitable knitting spirit? I’ve added the Dora bracelet to Ellie’s jewelry collection (which brings her bling to three) and I am really looking forward to a Gardenia scented bath in the tub! I love the dish rag colors, I think that is one of my favorite colorways. I am sure your captain will like it too. Even though she is very busy looking at her new baby! Don’t blink, Jennifer, I vaguely remember when Ellie was five weeks old. Vaguely. Thank you one more time, Carmen!

Congratulations once again to everyone who completed the race!

Now that all the boxes have returned home, all that’s left are the Individual Merit Awards! And the Superlatives and the photo contest, of course. It’s going to take some time to get all of that together for voting, so be patient with me.

It’s a shame I didn’t think to work on that a little bit at a time.

But then what would I do for fun this weekend?

But only after this baby takes a nap…

A fun sewing site! It appeals to my I’ll Do It Myself nature. Courtesy of Berrie Sweet Picks.

Please welcome Alabama Knitbloggers Holly and Angela to the group!

Entries for my little photo contest are closed! My goal to get the voting together for tomorrow!

I made myself a sweater vest. 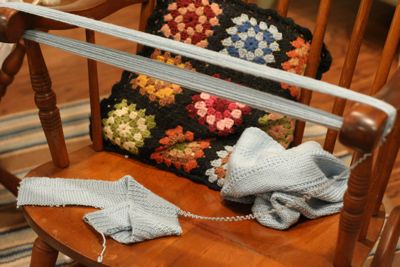 I love the rocking chair, it’s got great arms.

For some reason, I made it enormous. 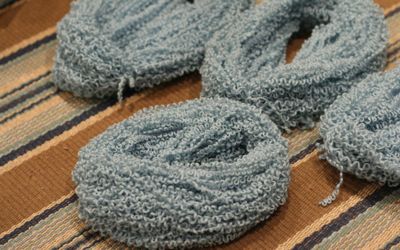 So enormous that the only time I wore it was when Ellie and I were sharing clothes. 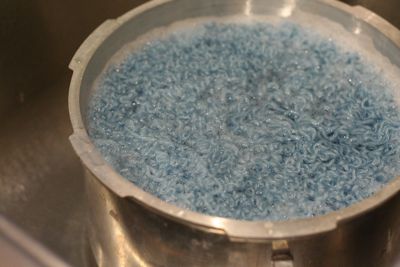 I want to make Ellie a sweater. 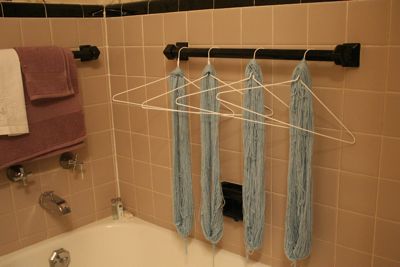 Drip dry in the tub!

I’ve got a sweater vest that I don’t wear made with a yarn I love (Creme Brulee) that is discontinued. 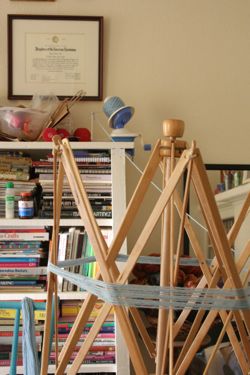 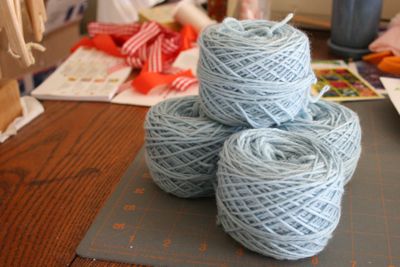 And now I’ll get to knitting.

I might just be crazy enough to try this.