I don’t know where I saw this one mentioned, but I hope the rest of it is as good as the introduction. 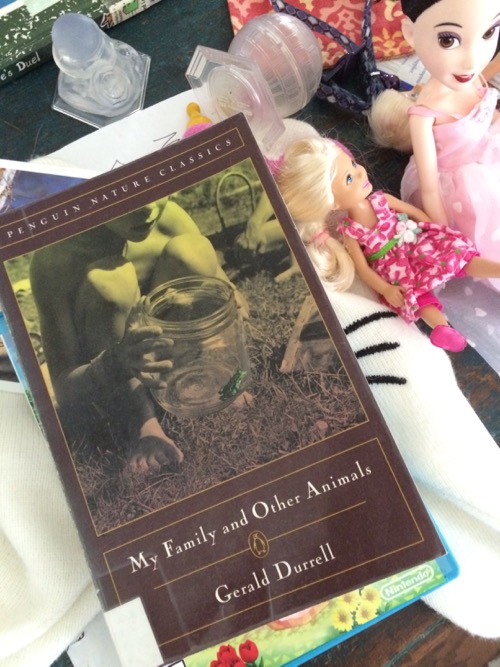 My Family and Other Animals

Ellie just finished Junonia (Kevin Henkes). Her current reader is the first of the Down Girl and Sit series. It’s short but really funny – the cat calls himself “Here Kitty Kitty” and the names on the dog houses are “Dot” and “Happy” – we’ll be finished with it by the end of the week. We’re reading The Last of the Really Great Wangdoodles (Julie Andrews Edwards) at bedtime. Michael is reading through The Dark Tower series. He never finished it which I can hardly believe. Everything but The Gunslinger was checked out from the library. We check out an embarrassment of books each week.

My upgraded library card didn’t stop me from signing up for Scholastic’s Readers Club as a homeschool teacher. Did you know about this? You can get the same benefits, points, and rewards as classroom teachers! They also send you those paper flyers like kids bring home from school. 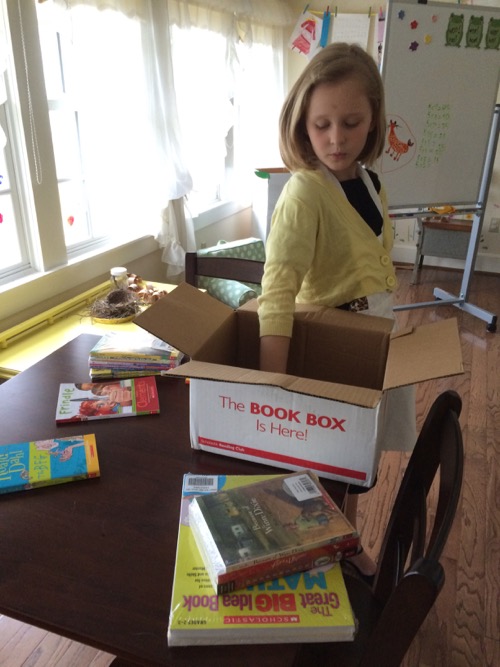 We have a little bit of a book problem. It can easily be fixed with more bookcases…

Ellie is a HUGE fan of math. This makes perfect sense to me: Math is cool. Oak Meadow Grade 2 is purposefully flexible about how much and how complicated math practice can be – the idea is to tailor the experience to the student’s needs/development/attentiveness. There is also lots of ‘mental’ math encouragement. Our mental math practice tends to be everyday math: Do I have enough cash to buy bread AND a Snickers? How many cookies can I have if I have to share? If I double this recipe, is there enough peanut butter for lunch tomorrow? Funny how most of my everyday math has to do with snacks. The Big Concepts we’ve covered in Oak Meadow Grade 2 are a super-thorough understanding of place value (you can’t get far without it), carrying/borrowing (‘regrouping’ if you’re younger than I am), and learning multiplication tables up to 12.

I got the idea (and the handprint printables) here – but it occurred to me that the big, precut shapes from the Dollar Store (in the school section) would have been cheaper and easier. I picked some up for when I run out of the hand prints. As Ellie learns a fact, I take it off of the wall. When there are no more facts on the wall, we eat ice cream and add a new set of facts. I only put up the ones she doesn’t know. Because of the commutative property of multiplication (look at me showing off!) 3×4=12 appears in x3 and x4, but there’s no reason to learn it twice. The non-aggressive repetition is ideal. 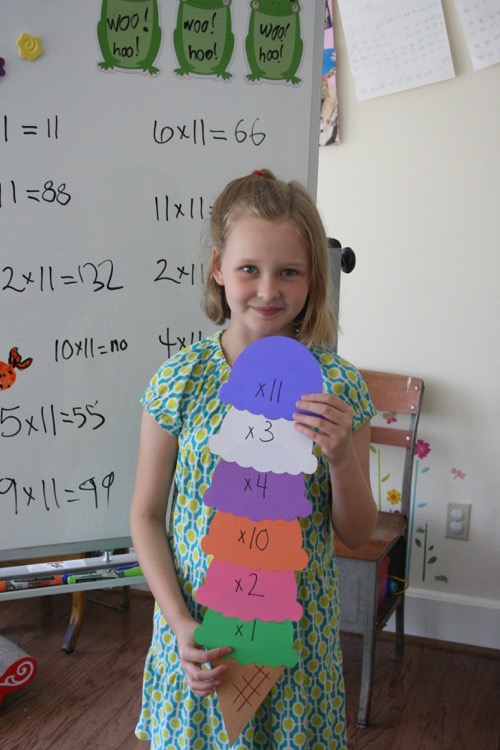 When people love something (chocolate, yarn, stuffed animals) it’s hard for them to get enough. Which is why we also have “recreational” math in the form of Life of Fred. 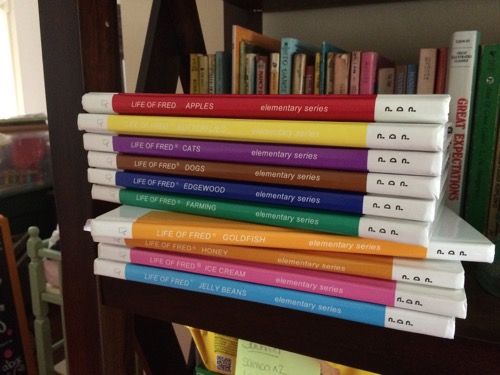 These are the 10 books in the Elementary Series. Life of Fred goes all the way to Calculus.

(hahah I am SO FUNNY)

Since I haven’t seen it mentioned in any reviews and I know some folks prefer to avoid any religious references in their school materials: {God} appears as an example of a set with one member, it is mentioned that Fred attends Sunday School, and there are a few other references that indicate Fred’s personal religious preference. Typically, religious overtones in a text book bug me. If I’m going to teach religion I will teach religion not religion-disguised-as-something-else thank you very much. I don’t feel like that is what’s going on here. Life of Fred is a story about Fred so the things Fred is invested in (Kingie, pets, Euclid, Sunday School) are just part of the narrative.

Michael thinks he severed my ties to Big Pharma. He said to hurry up and post something to see. 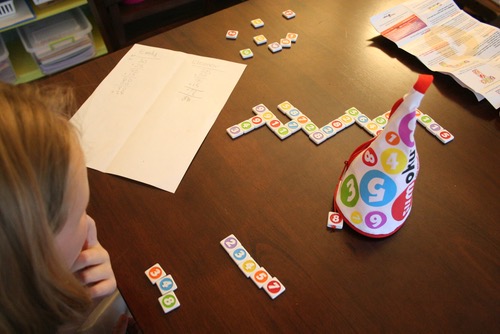 SUMoku is by the Bananananangrams people. You can find it on Amazon, but I think I saw it for the first time in a bookstore. 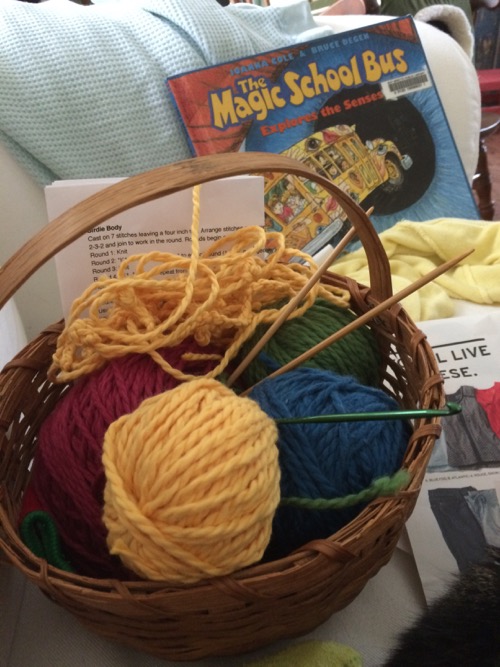 the yellow spaghetti mess is a pile of birdie legs

I haven’t made birdies in ages. This set of three is for the hospital’s fundraiser – there’s a silent auction.

(I’m also checking to see if my RSS feed is still hawking questionable pharmaceuticals since I updated all the plug-ins.)

Aw man. I just realized I have to re-learn cursive to teach it in Grade 3. 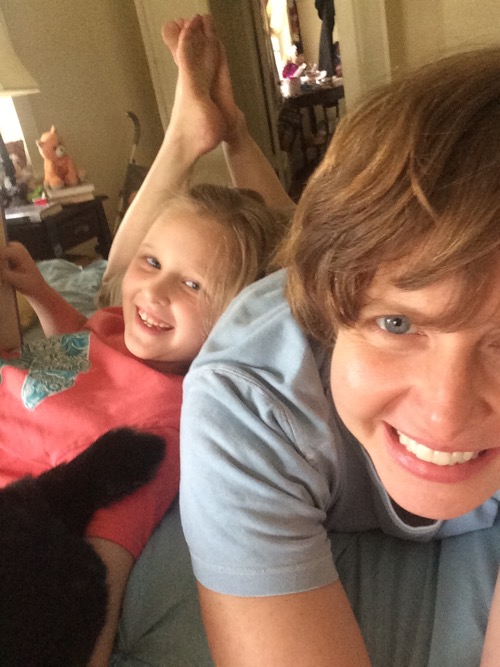 How many more times we can use the little plastic animals in the last 10 weeks of Oak Meadow Grade 2? 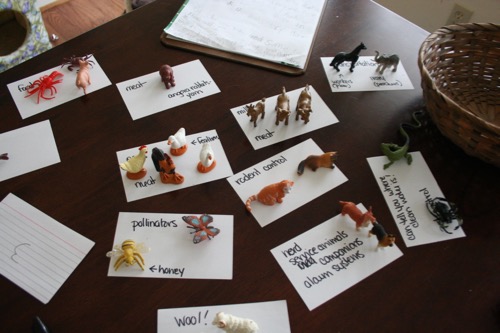 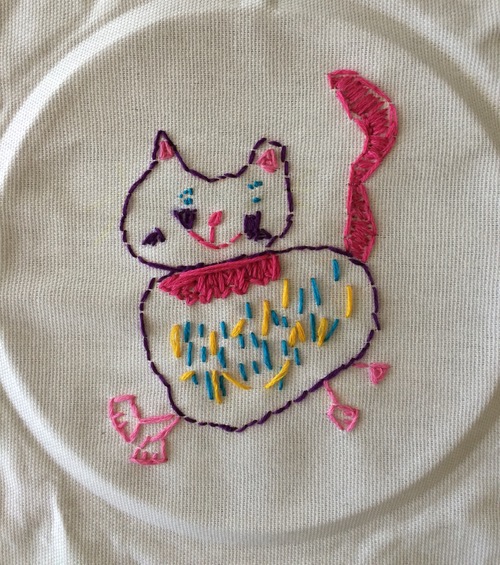 Time to get a frame!

We’ve also been carrying and borrowing in math (regrouping). We’ve covered all the multiplication tables up to 12 (Ellie has learned 2, 10, 4, 3, 11, and we’re working on 5 – all without stress or memorizing for a test yay), food chains, economics (money v. bartering), scarcity, animal tracks and locomotion, opinion writing, narrative writing, book summaries, descriptive writing, and have read all the things and then some. She makes associations between the content we’ve covered and her experiences in the outside world. Her writing is uh…substantial, so we’ve talked about topic sentences, supporting sentences, and conclusions to help her better organize her ideas (not in the Grade 2 curriculum – don’t stress). Her spelling has been the most surprising improvement for me (without weekly spelling tests and memorization yay) – lots of writing gives a person time to internalize spelling.

This is the BEST EVER. Happy Pi Day!

(we had key lime) 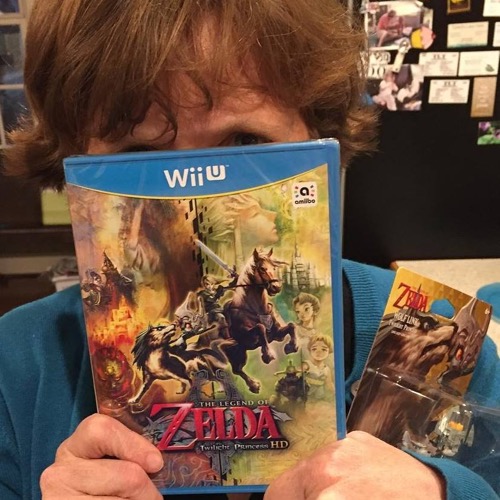