We’re spend-the-night visiting this week. At home, all our windows are broken into little panes. Here, the French doors are backed by enormous pieces of glass. 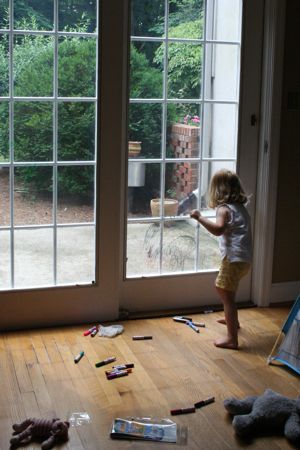 Marcia Louise was kind enough (to me and her granddaughter) to knit up a hive full of bees. She made a few changes as she worked, and I am SO in love that I need to make another set for Ellie! 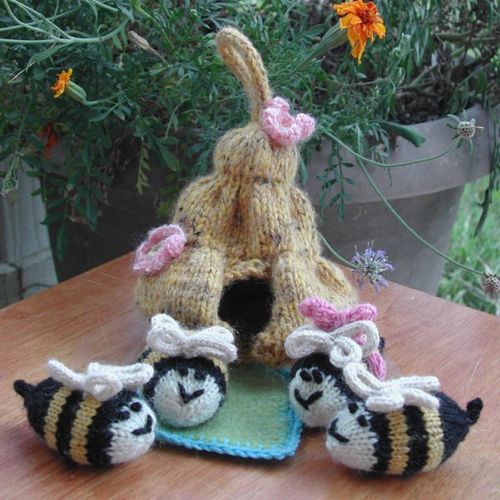 Look at the Queen Been in her little pink skirt!

My favorite addition is the i-cord handle on the beehive – that’s just inspired! Once in, the bees aren’t likely to get out on their own, so why not tote them around in a hive bag? My guess is that instead of drawing up the top of the hive, she (and please correct me if I’m wrong, Marcia Louise) continued in i-cord until the handle was long enough and tied it off. Really nice. I love the color changes too, their soft little faces are a great contrast to the stripes.

Marcia Louise also noted a couple errors in the pattern. Mostly stitch count mistakes, nothing that will keep you from finishing if you don’t want to download again, but the pattern is corrected on both Yarn Miracle and on Ravelry. She absolutely earned her honey! Thank you so much! 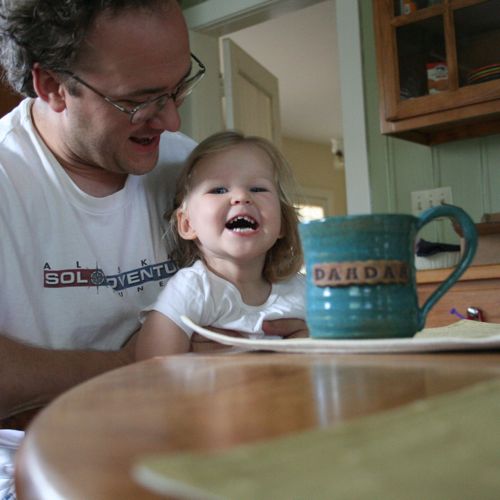 This year’s mug is from Lynn Cardwell Pottery. The heft is surprisingly light for ceramic and the form, glaze and functionality simply beautiful. Michael especially likes the handle. Ellie especially likes that “D” is for “DahDah.” I especially like that this Etsy seller is marvelous. Win all around.

Dear Emily,
What’s up with all the posts? I mean this in the best possible way: you talk too much.
All my love,
Your Lone Reader

Dear Lone,
Just one more this week, I swear!
e

Etsy’s got a collaborative shop where all the proceeds will Help the Gulf Coast. I made an Itty Bitty Pelican to help out! 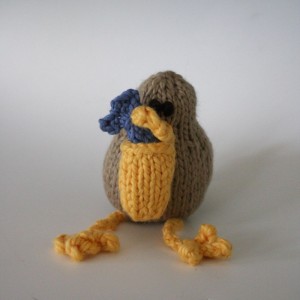 He’s even got an Itty Bitty Fishy snack!

I think I’ll make a few more for my own shop. If I sell 10 in the shop, there’s enough profit to adopt a real pelican through Tri-State Bird Rescue. Which would be pretty cool.

Lofty goals. I has them. 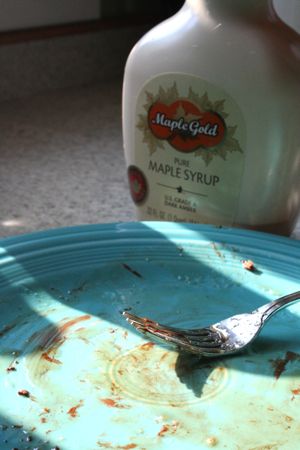 Can’t take a pretty picture of pancakes when you’ve eaten all the pancakes.

Whisk up all the dry.
Whisk in the wet.
Into the hot (lightly greased) frying pan! You all know how to cook a pancake. Sprinkle a few chocolate chips on top of the wet batter when you first pour it in if desired. And who wouldn’t desire?
1/4 cup scoops of batter will yield 6 pancakes. I make four smaller pancakes out of a halved recipe when it’s just Ellie and me.
Slather with fat** and maple syrup.

I found this recipe at Happy Little Vegans. I like them better without the 1/2 t. of cinnamon.

Chickens have it rough. Give them a break on Pancake morning.

*Ghirardelli Semi-Sweet Chocolate Chips are produced with no help from cows and (in my opinion) are the best chips in the grocery store.
**If you’re already using margarine, give Earth Balance a try. It melts beautifully, is non-hydrogenated and doesn’t even contain the little bit of milk that the others do. If I can get it at my Wal-Mart, I’m sure y’all can find it at the grocery store.

It’s possible you’ll be hearing more about this program by Tri State Bird Rescue, but I have to give it a little more thought first.

Both versions of the Itty Bitty Birdies are now available for download as part of the Knit Picks Independent Designer Program! For the moment, Knit Picks is the only place the birdie patterns are available – and they are just $1.99 each.

I’ve even got a profile! Makes me feel all legitimate. And really really silly excited!

I had great time with this project from start to finish. Many many thanks to my test knitters. If you (the Birdie Test Knitters) don’t have copies of both finished Birdie PDFs in your in-boxes by tomorrow evening, please let me know (I was having server issues this morning).

I wrote the How To for the Natural Kids Blog today! 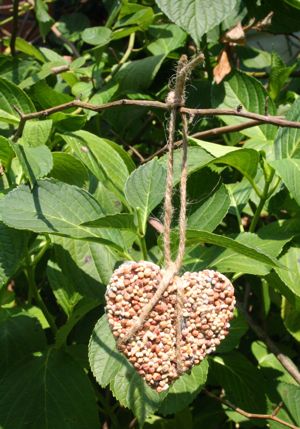