I first learned to knit for a one-act play in high school. My character had no lines during the first half of the production even though she spent the entire time on stage. I figured she needed something to do with her hands – knitting being 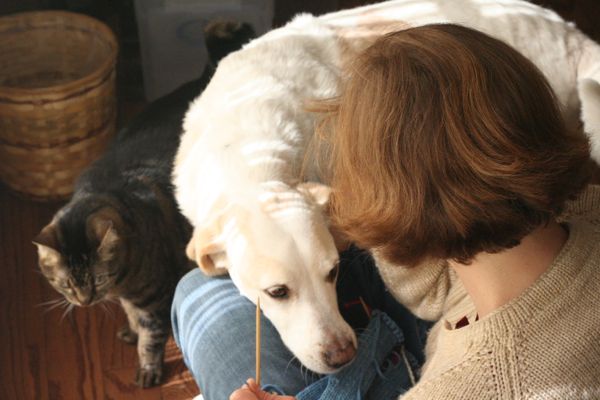 the logical choice. I worked on a garter stitch afghan and unraveled all of my progress after every rehersal and production. The afghan turned out very holey and completely unusable. My character turned out to have murdered her husband. We won our region in the literary competition that year.

I learned to knit “for real” on February 1, 2001 (my grandmother’s birthday). I had found the needles from the play (massive Boye #10.5) and decided that since I was going to visit, now would be a good time for Great Gran (my regular grandmother – just think of the “great” as a superlative) to remind me how to knit. So I ran to Jo-Ann’s, picked up a couple balls of yarn for a scarf, learned in the kitchen at The Farm and then took it all back to Atlanta with me. Great Gran sent me home with a book called I Can’t Believe I’m Knitting and I am so glad she did. I had to start over so many times on that thing. I didn’t know how to “un-knit” stitches at that point, but I suppose all the ripping made for good casting on practice.

Needless to say, by the end of the scarf I could tink like a champ. So, the very first real and usable thing I made was a garter stitch scarf in Lion Brand’s Wool-Ease maroon sprinkles. I mailed it to Great Gran and she used to wear it with her navy coat.

After that, Great Gran suggested an afghan – she had just the thing. While she was locating the book and sending it to me, I scoured the web for stitch patterns and techniques, practicing them with junk yarn from my craft supplies. I made Angus, the dog, a little green basket-weave afghan for his bed before the new pattern arrived. By the time I was finished with the afghan, I had discovered the premier issue of Knit It! magazine and decided that “Our Basic Sweater” was a good first sweater for me. And it just went on from there.

When I started this blog, it was me, Michael, Great Gran, and Angus.   Right now it’s me, Michael, Ellie, and seven cats.  How things change.

One thought on “About Me”