I started the Mermaid tail for the F pattern! I’ve made some yarn decisions for the rest of her (Woo!). I worked quite a bit in the yard this week too. The raised beds were planted last week. This week I started the long, arduous process of cleaning out the long, long, long neglected flower beds. After a year of PTO and a summer of It’s Just Too Hot, conditions are bad out there.

I also got the submission to our Oak Meadow teacher together. Pro Tip #1: If you’re enrolled, it’s a good idea to try and keep up with the photographs and labeling as you go along. The monthly submissions only require one example of each subject from each Lesson/week, but the big submission (Weeks 1-18) requires more (I haven’t actually done one yet so i don’t know how much more). It’s better to just photograph everything and label it while you still remember what it is you’re labeling. The first submission (Lessons 1-4) wasn’t that time consuming, but this time Ellie had created so many books that labeling all the photographs took forrrrrever. I take action pictures of our activities so that my submissions aren’t just pictures of her finished work. It’s interesting to see how we completed the activities and not just the results. In addition, many of the activities don’t have a physical result to photograph (like learning to use a compass). I don’t take enough pictures of Health. Pro Tip #2: make sure you take pictures of Health.

What We Did During Week 9:
Language Arts has switched to fables for reading comprehension and writing. Math was the 3 and 6 times tables (and reviewing 2, 4, 5, and 10). 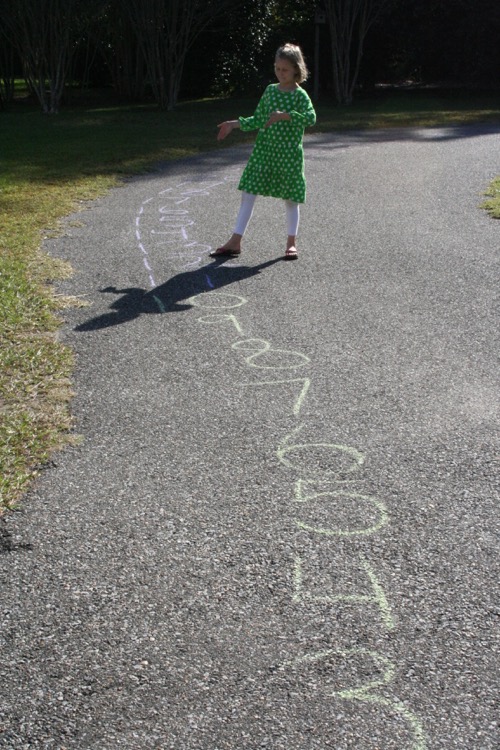 Demonstrating 3 x 4 = 12 on our MASSIVE number line that goes all around the driveway.

Science was recording observations about how plants grow. Three pots with dirt and seeds: one gets sun and water, one just gets sun, and one just gets water (it’s in the closet). We used oat grass since it germinates quickly and Ellie predicted that the one with sun and water would be the one that sprouted. All three pots sprouted (our potting soil was slightly damp in the sun pot and the closet pot has white sprouts). The tracking charts she made go to Day 9, so we’ll see what survives until then. Lucy will probably eat the sprouts before Day 9 and end the experiment early. 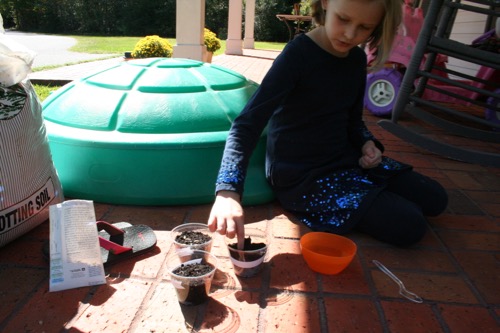 Six seeds in each pot!

Social Studies has redeemed itself. We discussed our family’s lifestyle: where we live, our daily rhythms, our favorite family stories, and how daily life changes with the seasons. Ellie made a book with her thoughts and observations. As much as I was whining about the stories of the past few weeks, the Social Studies curriculum is strong. Very strong considering that many conventional elementary schools don’t have Social Studies at all. There is thought put into how our modern life compares to the lives of the story characters in other countries as well as how the themes of the stories of ancient cultures relate to our modern life (or not). 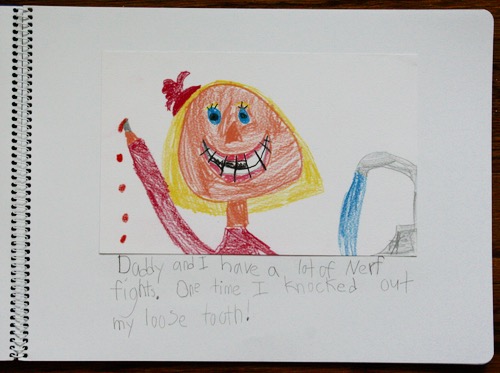 Ellie’s (current) favorite family story. “Daddy and I have a lot of Nerf fights. One time I knocked out my loose tooth!”

A quick aside: you’ll notice that Ellie isn’t writing on lined paper. Oak Meadow in the early grades stays away from the lined paper used in conventional education. Instead, the emphasis is on making letter shapes correctly and developing a personal sense of spacial relationships by arranging the words on the page independent of influence. (Independent of influence besides me saying “watch your margin” and “make sure that looks like two words” anyway.) Ellie’s handwriting has improved ENORMOUSLY in just these two months. It’s really startling. And makes perfect sense developmentally when you give it some thought.

The rest of the week was happy gravy. The weather was beautiful, the cats visited often, Girl Scouts was Tuesday, and Play Group at the park was Friday. 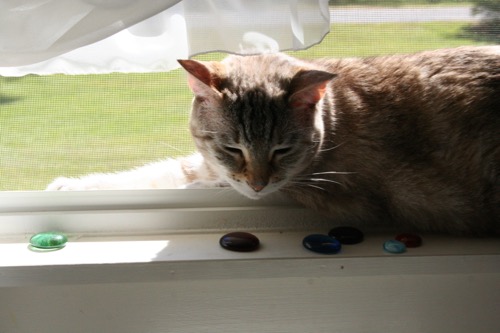 This is Abigail. This open window was also visited by Lucy, William Henry, Lady Bird, and Betty over the week. Mamie does not believe education is necessary.

When you homeschool an only child, you have to own that on an everyday basis, You’re It. You’re the alarm clock, the playmate, the entertainment coordinator, the chef, the teacher, the task master, the parent, and the grown-up. That’s a lot of jobs. Some weeks there’s not much time left for anything else.

For the record, I didn’t realize that I had missed Lesson 6. I thought I was just late posting about last week. This proves that jet lag is not a myth.

Ireland in Social Studies. Well, really the ancient Celts. Social Studies has been a little ‘meh’ the past few weeks. And I know you’re thinking: How is Ireland, where the people practically invented the fairy tale, ‘meh’? The answer is that only one story has fairies in it while the other two are about saints (and no context is given). If we had been on our own instead of enrolled, I would have substituted either more interesting versions of the stories or new stories entirely. As it was, I supplemented. I’ve decided to do social studies backwards when the story is unapproachable on it’s own – we’ll complete the enrichment-type activity first and follow with the story and discussion. At least that way she’ll know what she’s supposed to be gleaning. The art that goes along with the the ‘meh’ has been pretty cool. We made ink. 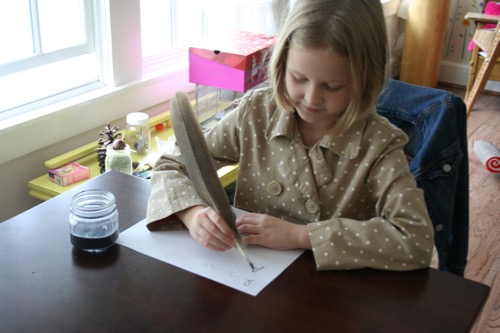 Science and Language Arts helped alleviate the ‘meh’ of Social Studies. This week we made a leaf ID book for Science. In the weeks before that, the Science focus has been on daily rhythms. She kept a record of her daily wake up time, when she was hungry, and when she had exceptionally high or low energy. The following week was focused on plant and animal life. We have a bevy of wildlife in the woods! All kinds of animals! The only ones who showed up for the record of animal life were lizards, birds, and Tyler. 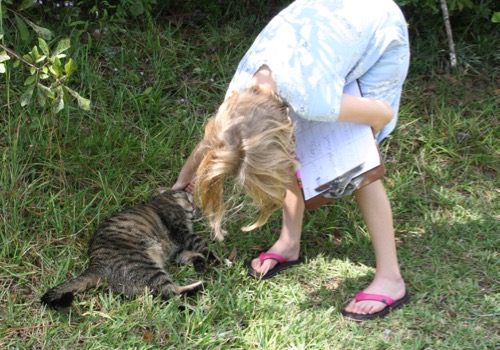 Language Arts has been all about the poetry. Ellie ‘learned by heart’ the Owl and the Pussycat, set a poem to music, and created her own written language which she used to send notes to Michael. She also wrote and illustrate a couple of story books (one because she got carried away with the assignment and one because it was the assignment). She’s one chapter away from finishing the last of the two provided readers and then we are free to pick whatever we want for read-aloud practice. The thing that struck me as extremely useful was the creation of a personal spelling word list. In typical school, as you know, kids get a list of spelling words to memorize each week. Ellie’s spelling word list is words that she typically (or repeatedly) misspells when she’s writing rather than a random list of words that she may or may not use again or that she already knows how to spell. No test at the end of the week, just practice until the spelling is internalized and no longer a hinderance.

Ellie loves math and is so so so happy to finally be doing ‘real’ math. Story problems during Lesson 6 to review the four processes and horizontal and vertical equations, then 2 and 4 times tables, and this week was 5 and 10 times tables. Memorizing times tables is going to be a total bore. Anything that happens over and over (if it doesn’t involve a Magic School Bus, a witch, or a princess) is an abomination. It’s actually solving the problems that engages her. This bodes well for algebra. She writes smaller so she can fit more problems on a page she likes math so much. I’m going to search the web for some songs or games or something that will help us survive the repetition since my imagination needs a boost.

Since we are enrolled and just finished Lesson 8, I’m working on the second batch of work to submit to her Oak meadow teacher. That means importing photographs and label label label.