Knitting Scouts! I’m gonna need a sash for all my badges.

A fox in socks! If you order, be sure to pick the option for “download only” to spare yourself some shipping.

I confess. I’ve been stalling on this post. For some reason I got it into my head that there was only one US box still out there and that it was only a couple days away. There are actually two still out, so I have No Idea how I conceived this notion. I have had several dreams about Dish Rag Tag, it is a real possibility that this was one of them. So, with my abject apologies (and no further ado),

Team Number 17 to finish the race is: 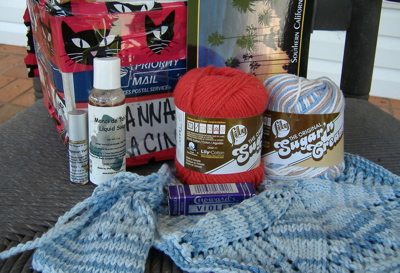 The bottles are vanilla-scented oil and yummy smelling soap!

Completing the arduous journey across the country, The Wannabe Racin’ box from Susan (her blog’s name makes me cackle every time) was a joy to unpack! Not only is the dish rag beautiful, but she included a little matching sachet bag! I am in love with the pattern (Susan posted it on her blog) – I wonder if it would work double stranded as a chair cushion pad… Oh! See the purple roll of candy? That is Choward’s Violet. One of the most interesting things I’ve ever tasted – undoubtedly unique and decidedly old-fashioned (well, it was developed in the 1930s)! Thank you so much, Susan – and your FiFi is breath-taking!

Eighteenth in the Final Standings is: 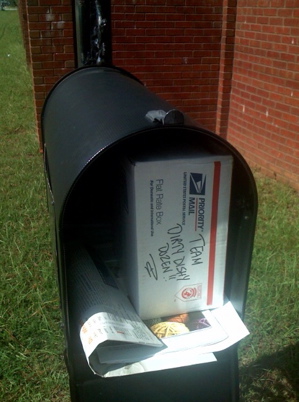 That photograph is courtesy of Michael’s iPhone. The Dirty Dishy Dozen’s original box had such a hard journey that it was retired by the USPS. Kind of like when a football team retires a jersey. 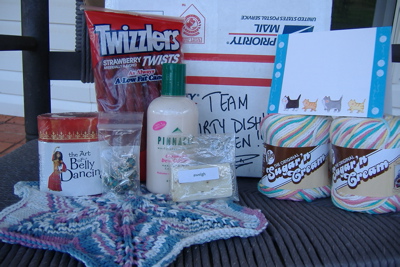 The star dish rag is wonderful! I’ve never seen anything like it – and I am completely tickled by the wee tiny Belly Dancing Kit! It’s got finger cymbals and a sparkly stick-on belly button adornment! I can’t wait to practice, I am sure the cats will be very impressed. There is also some delicious hand lotion, some soap, very pretty stitch markers (with dangly beads that will forever make me think of them as the Belly Dancing Stitch Markers) and Twizzlers that Michael has claimed as his own. Thank you so much, Debi – I am sure everything in the box was cat-approved.

Speaking of cat-approved, we got a new printer today. I am already fond of it. William Henry is fond of the styrofoam in the box so we turned it to the wall so he couldn’t create a snow drift. As I was working on this post, I could hear him fussing with the box and trying to move it around. Then it got quiet. Too quiet. 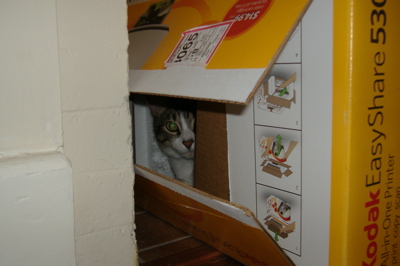 December 8 (a tentative date) is Pretend to be a Time Traveler Day! Hooray! 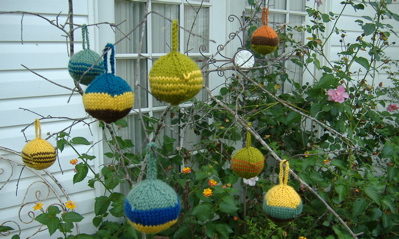 These are the Knitted Ornaments from Handknit Holidays (edited by Melanie Falick but the pattern is by Leigh Radford). They were so much more fun and fast to make than I expected – I was shocked that in just a few days of casual knitting I was finished (I got the yarn last Saturday – Lion Wool). I love them.

I have awarded myself one point for finishing ornaments in September and another point for using non-traditional Christmas colors. Christmas has earned a point for the animated lawn Santas that appeared in Wal-Mart before Labor Day. The current score: Emily – 2 Christmas – 1

Tomorrow should be kinda windy and rainy for us because of TD10 (we are in Alabama’s right pants leg). This is not a big deal, we need the rain and for tropical storms all I do is turn over the rocking chairs on the front porch.

The 14th box to finish the race! 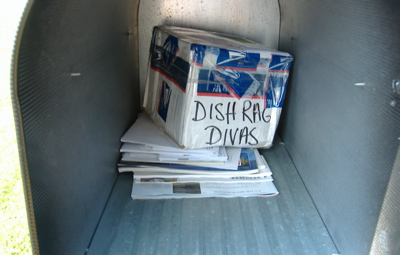 Knitting the last leg of the race for the Divas was Jennifer! She sent me great treats: 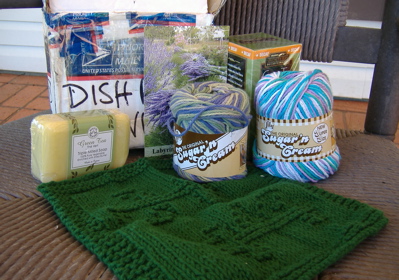 The green tea soap has perfumed the room!

The delicious green dishrag is in the “Flying Keys” pattern from Insanknity and is very cool – although it didn’t photograph well enough to show you. The yummy cotton and Green Tea are most welcome! Especially since it has been cool in the mornings lately. It’s not soup weather yet, but a cup of tea is certainly welcome. Thank you so much, Jennifer!

Boxes 15 and 16 finished the race neck and neck: 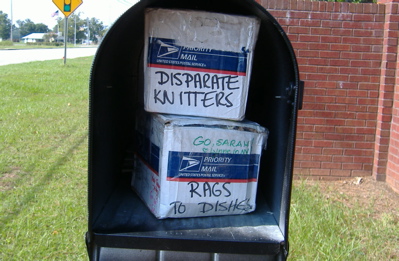 I think the mail carrier was feeling creative.

Hooray for team Rags to Dishes and the Disparate Knitters! 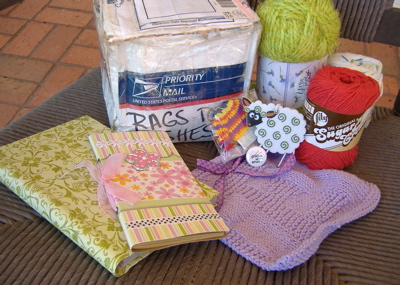 The Rags to Dishes dish rag from Cindy has an “E” on it for me! It was knit in part in a very creative place (see her September 14th entry). She has also included two very sweet blank books, fun cotton (I think the white one is going to come out polka dots), a cute sweater key chain and sheepy ornament! Thank you thank you! 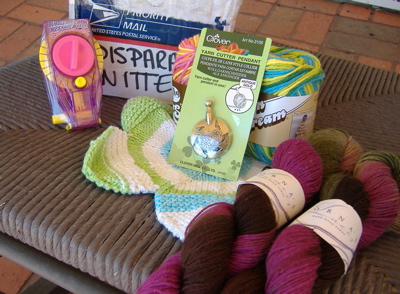 Representing the Disparate Knitters, the flower dish rag from Grace is made with self-striping yarn which worked out beautifully. The Lorna’s Laces is in the color way “Vera” which, for reasons I can’t explain, makes me want pie. I would also like to direct your attention to the Bubble Tape Label Maker which has given my several minutes of entertainment already: I wrote William Henry’s name on the gum to see if it would make him feel better about the whole eye thing. He was unimpressed but I enjoyed it so the gum didn’t go to waste. Thanks a million, Grace! I think the LL may be destined for a berry basket sock with a pie crust edge!

Many thanks to all three teams for making Dish Rag Tag a great success!

Hmmm. Looks like all the status bars are stuck again. I’ll go clear the cache. Incidentally, I don’t know why some of them extend past their designated space. I’ll get Michael to work on that for next year. Oh dear. Did I just say “next year”?

I wasn’t feeling too great last week and neglected to record things about Dish Rag Tag like I should have. So now I have a problem besides the giant pile of accumulated email (I am so ashamed about that! I haven’t even written my new Special Swap Partner, Marisol!) : I know the order in which the boxes arrived (because of the way they are in the camera), but I have to use the tracking numbers to figure out the arrival dates.

The 10th box arrived (the halfway-point for the US teams) on the 12th of September: 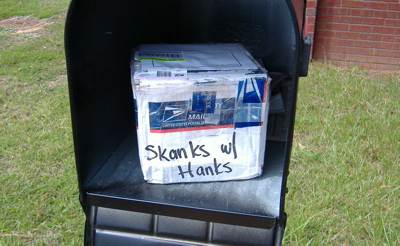 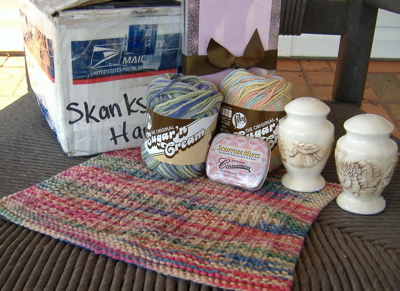 Arriving directly from Mandy, the Skanks’ box has a great dishrag (love the pattern), some pretty note paper (brown and pink, yum), the greatest Thanksgiving salt and pepper shakers (what a wonderful idea – I will remember that for swaps in my future) and some lovely paper for Betty to shred (she is tearing it up right now, such a helpful recycling kitty). Many thanks to Mandy!

One day later, the 11th team finished the race: 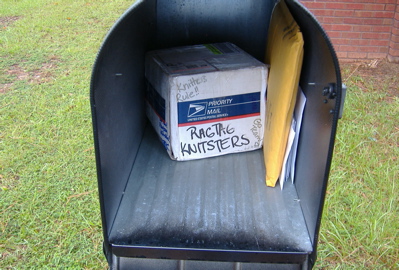 The big yellow envelope is the Lamb’s Pride color card – more on that in a later post. 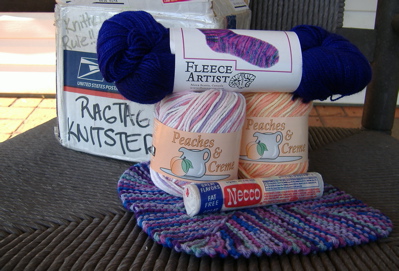 The orange cotton is named “Orange Sherbet,” I would have guessed “Creamsicle.”

From Abigail who I am thrilled to have a dish rag she made to keep for myself (she already made me ten)! Also in the box is Merino sock yarn from Fleece Artist! I am beside myself! I have read so much about this company/yarn I am so excited to try it for myself – it’s got a very pretty twist and a pattern on the label (added bonus). Thank you so much, Abigail! 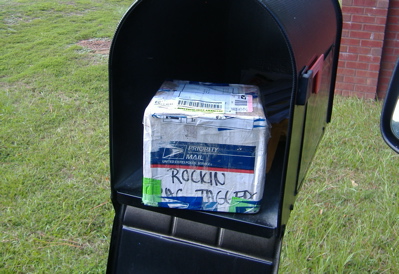 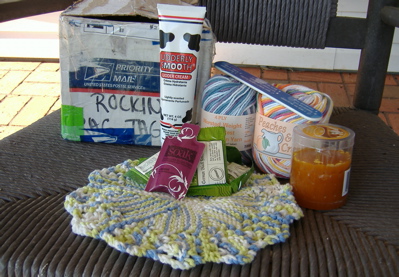 For some inexplicable reason, the yarn on the right makes me think of the bubble gum ice cream that Baskin Robins had when I was little (the color is actually “Gumdrop”). The chocolate that Sandy sent is German Black Forest Truffle (from the geniuses at Russell Stover). The lotion is destined for one of my (too many) project bags, but I think I am going to leave the file (haha it’s from Eucalan – what marketing!) by the computer. I’ll use it while pages load! Thank you so much, Sandy! 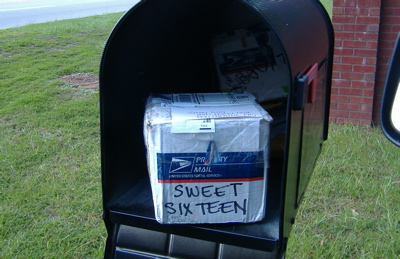 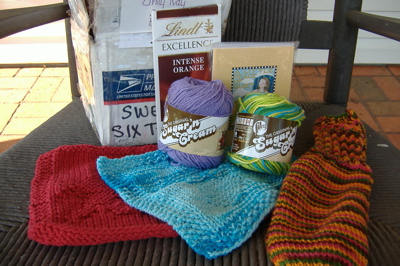 The blue one has a flower and is the Official Tag Dish Rag and the red one has an elephant! If you live in Alabama you know what that means. Roll Tide! Tickled me to death. And after I looked at Kim’s return address, I got to laughing even harder. (For all of this to be funny, not only do you have to know where Kim lives, but you also have to be up on your football rivalries. Seriously. This kind of thing tears families apart.) The sock fit great – and are a really clever design too. Not pictured is a card signed by the entire team (the picture looked weird). Y’all come up with the best ideas, each box brings something new and unexpected! Thank you, Kim and the whole Sweet Sixteen Team.

I’ll get my act together and generate your certificates tomorrow. But honestly, with the picture uploading issues, this post took all day to put together and I am in pajamas and ready for bed.

Michael just asked me when the pile of opened boxes on the dining room table will go away. The answer is (in case you were wondering), when all the thank you notes are written (I am halfway done). I kind of like the pile where it is. Every one who comes over looks a little confused but afraid to ask.