Our new town experienced 95% totality in today’s solar eclipse. We moseyed down to the park to watch it with the rest of town. Sadly, all the commemorative t-shirts were sold out long before we got there. They had planned a light show (the park’s fountain dances and lights up – they do a show each night), but it didn’t really get dark enough. Even when 95% of the sun is covered up, it’s still pretty bright. 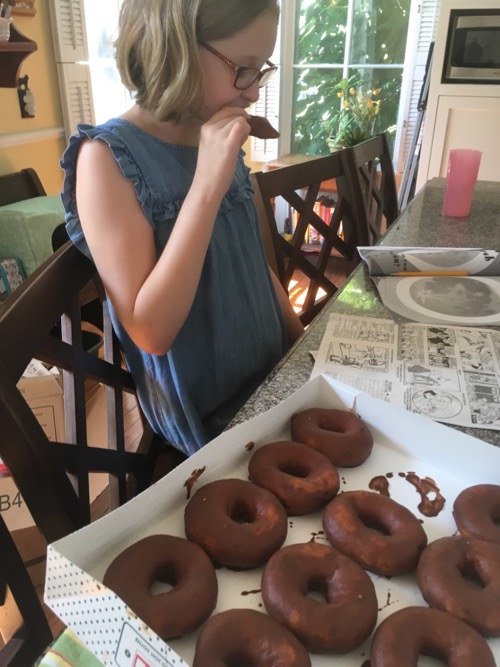 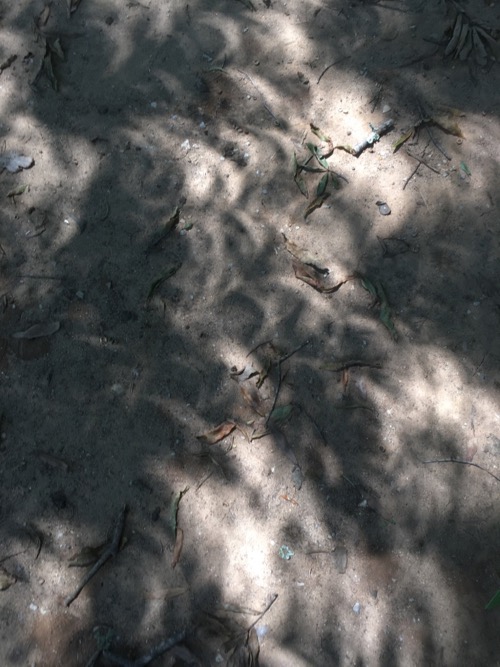 My favorite thing is how all the leaves act as pinhole viewers. Hi, little sun slivers! 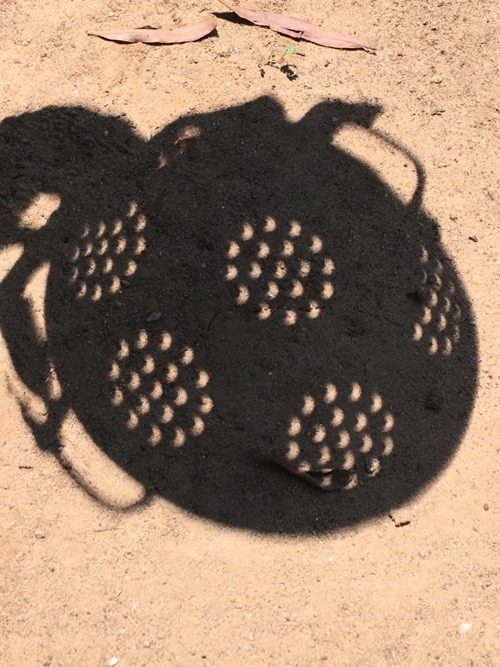 Here is the colander making lots of eclipse images. 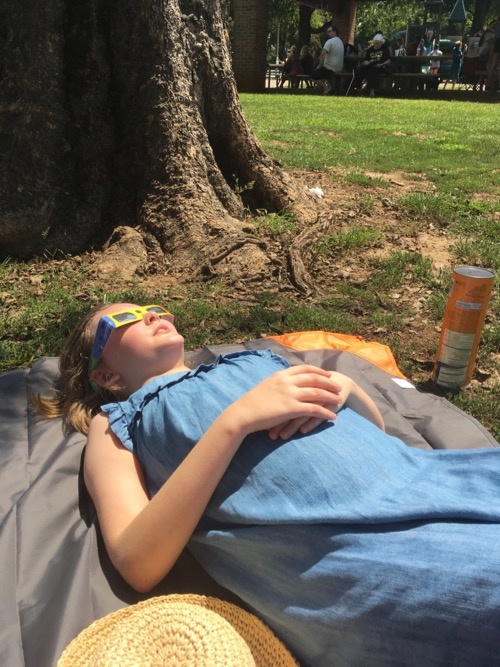 Our solar glasses came from the local Astronomy Club. That’s our Pringles can viewer to the right. 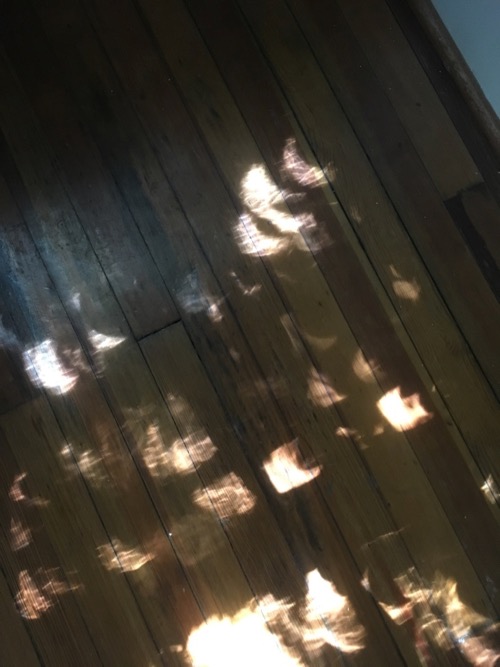 When we got back, the leaves were still making eclipse images on the kitchen floor. 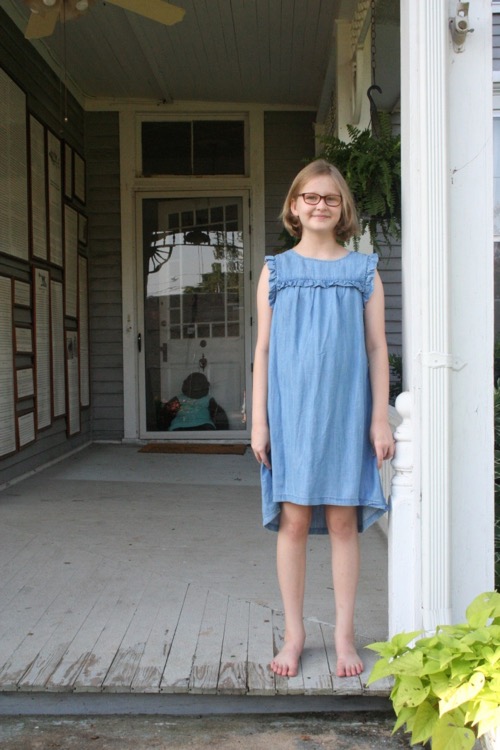 How things have changed.

Still no shoes on anybody.

I’ve been adding small rugs every now and then to see how the cats feel about them. I’m experimenting with the small ones before I invest in large ones (to see what kind hold up best with all the claws). 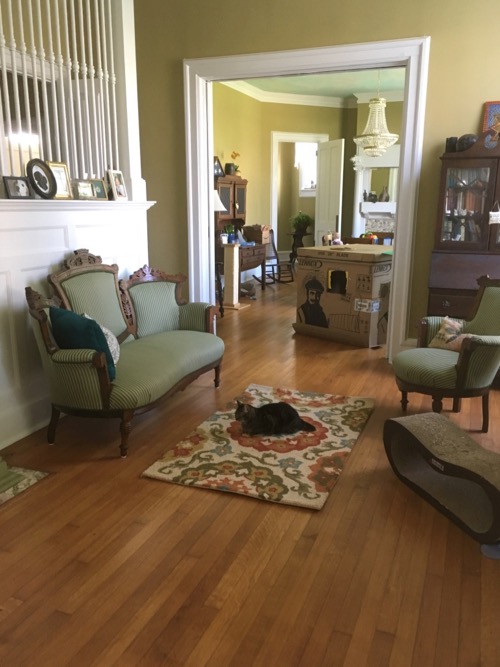 Betty likes this one.

The cardboard box in the dining room is Ellie’s souvenir of the new air conditioner. It’s a play house (right now).

Alabama’s Special Election Primary is today. In case you haven’t been keeping up, we’re voting on candidates to fill Attorney General Sessions’ seat and finish his term. Ellie and I strolled across the street to do our Civic Duty. 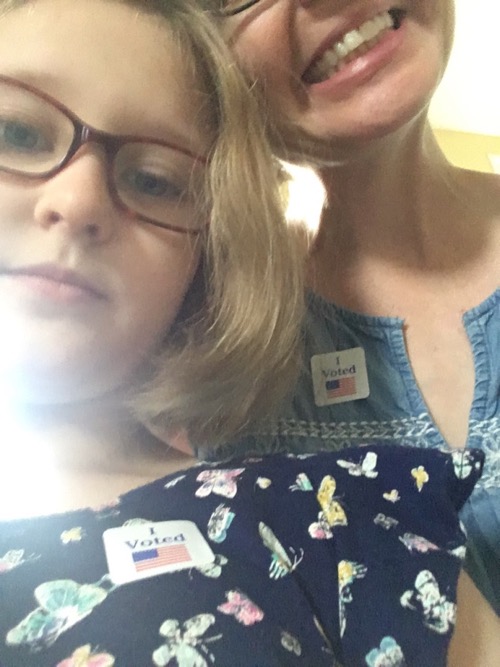 We do it for the stickers.

It was lonely in there. It looked like mine was the fourth name on the voter roster. There were four poll workers.

Go vote, Alabama! You’ve got so many choices today – there’s even a Democratic primary ballot! It’ll only take a minute since there’s nobody in line…

Update: You might have seen us on the national news. We’ll have a Republican runoff on September 26 between Roy Moore (Alabama has fired him TWICE) and Luther Strange (got his appointment under Dubious Circumstances involving our Former Governor). Doug Jones (successfully prosecuted two of the men who bombed a church in Birmingham in 1963 and killed four little girls) will represent the small blue dots. Just as a general point of interest: Alabama hasn’t elected a Democrat to the Senate since Senator Shelby in 1992. He defected to the Republican Party two years later and is still Alabama’s senior senator. Out of 3.3 million registered voters, only 578,326 people cast ballots on Tuesday. That’s not democracy.

I like rainy mornings best when I don’t have to be anywhere.

Paws in my coffee.

I’ve not got the vocabulary for this much disgrace. I’ve been thinking a lot about how hate is something that is taught.

In case I’m not being clear: I don’t like bullies, hatefulness masquerading as history, or white supremacy. I have benefitted from a social system that is set in my favor solely because of what I look like. This same system is set against many others solely because of what they look like. This is not right, or just, or kind. None of us are in control of how we are made – we are only in control of how we act and treat others. Do good. Be good. Show up if you have the chance.

Ellie and I got hair cuts this week. Ellie also had her ends dyed blue. It’s subtle but it’s there. 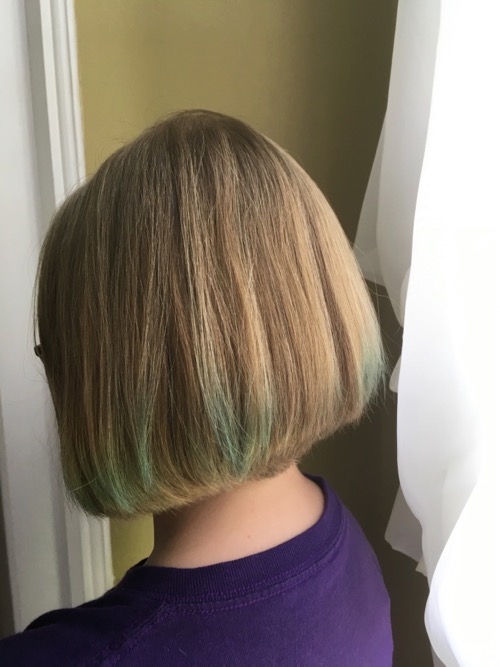 We think pink next time. 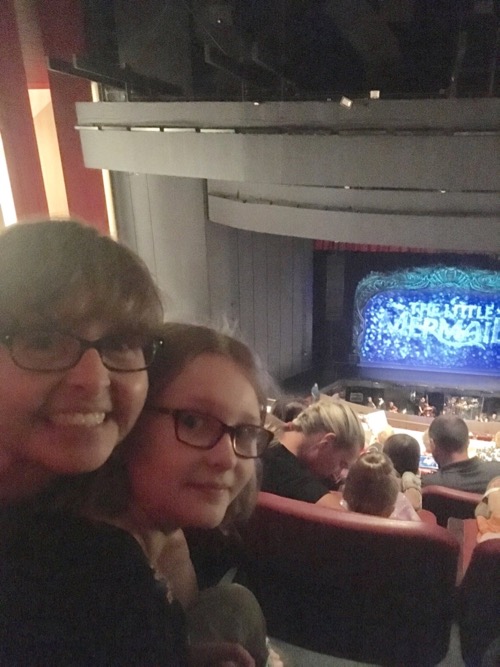 We are a long way from the stage.

We took a road trip up to Nashville to see The Little Mermaid! We somehow managed to get the last three tickets available for this sold out show (we only just discovered the Nashville Performing Arts Center’s calendar a week ago). Our seats were in the middle of the very very last row of the balcony. The air was thin that high up but we still enjoyed the show.