Look what we did while we were cut off from civilization!

We’ve got these things here called “thunderstorms.” Maybe you’ve heard of them? On Tuesday morning, lightning came in through the phone line and took out the internet (and the land line but we don’t care as much about that). The internet just got fixed last night.

Did I miss anything?

Half day of school on Friday! 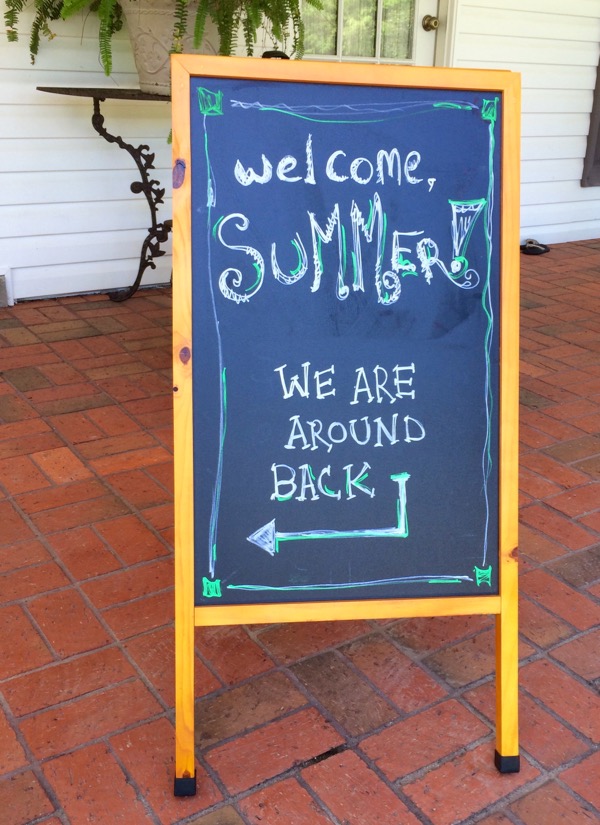 I’ve really gotten my $$ worth for this chalkboard.

Ellie had a some friends over to celebrate with make-your-own ice cream sundaes and water squirt things. 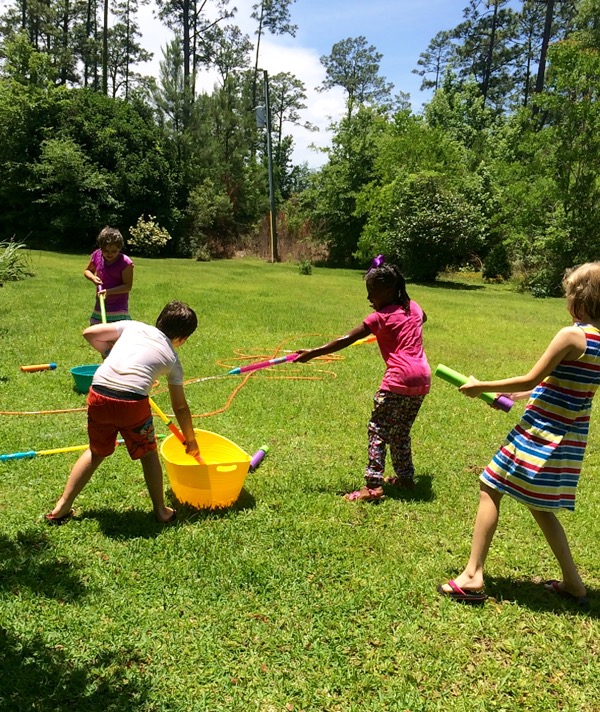 Squirters because I thought the kids would get LESS wet than the sprinkler. I was very very wrong.

And then took a nice nap. 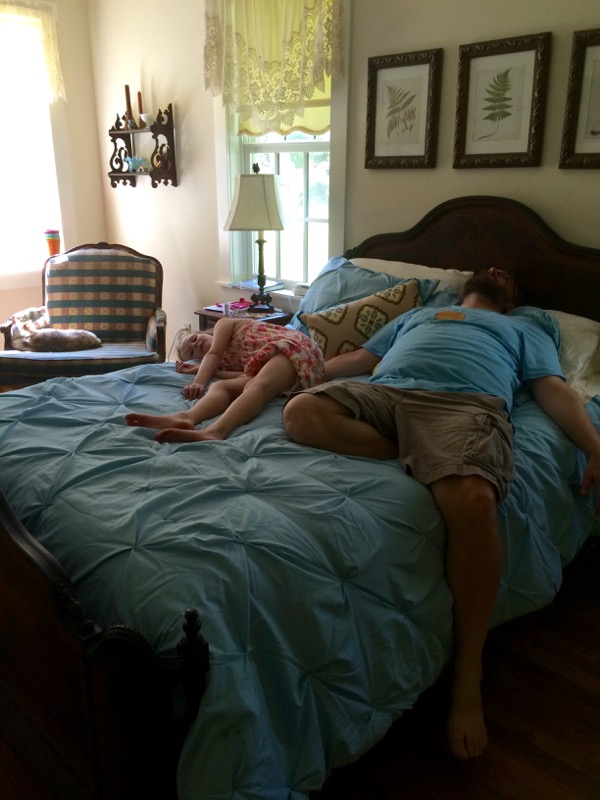 So peaceful. So quiet.

We had a family meeting that night at dinner to talk about our plans for the next school year. The final vote was unanimous: we will not return to our Elementary School in the fall. If I hadn’t already made up my mind that this was a better choice for all of us, that last School Board meeting and subsequent resignation of the Superintendent would have sealed the deal. I have zero faith that this board is capable of affecting lasting change. Without drastic changes to the current maintenance system, a brand new building won’t help the situation – it’ll be right back in ruins fifteen years from now.

I’ve got my eye on an accredited distance learning program that sounds like it was made for Ellie.

Last Thursday was another Board of Education meeting with the “work session” scheduled to happen immediately before the voting session (it’s usually the week before).

Hang on, let me back up a second.

The Board has said repeatedly that our Elementary School is the worst building in the county. They told everyone that during the property tax referendum. Just weeks ago, everyone agreed that a new facility was a top priority. But because the referendum was resoundingly defeated – two of the renewals as well – the school system has no money. Less money than before without the tax renewals. So a whole new building is out of the question. A wing will only cost around 5 million and they have 10 million in the bank for capital improvements. The Common Sense Campaign (Tea Party) that campaigned strongly against the referendum is in full support of the wing saying “it’s the right thing to do.” A wing is what the city wants. A wing is the logical choice, the affordable choice, and the choice that will restore some faith in a school board with a serious PR problem (a big cause of the aforementioned “resounding defeat”). Which will make what happened next boggle your mind.

Instead of talking about building v. portables, the Board opted to discuss whether to close the school at all. The feeling was that the building “had been neglected” but that it was all cosmetic and a couple hundred thousand dollars would fix it right up. One of the board members didn’t even go inside our school – he just drove by.

We left in disgust before the work session was over.

The superintendent resigned the next day.

*I’ve seen the mold report – which ones are the “clean” rooms again?

Today is Field Trip Day. I brought the camp chairs. 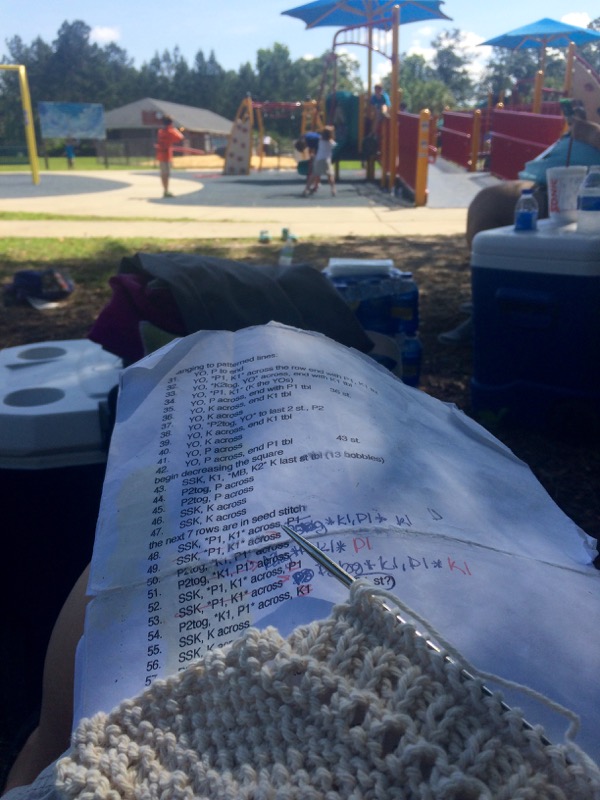 It’s nice in the shade.

Field Day was moved from last Friday to yesterday (the weather was supposed to be bad). So that’s done at last. I’ve got no photographic evidence since I sold snacks the entire time.

Today is Ellie’s class’s End of the Year Field Trip to the park. I’m hot and tired just thinking about it.

It was Teacher Appreciation Week at school and there was a lot of cuteness. 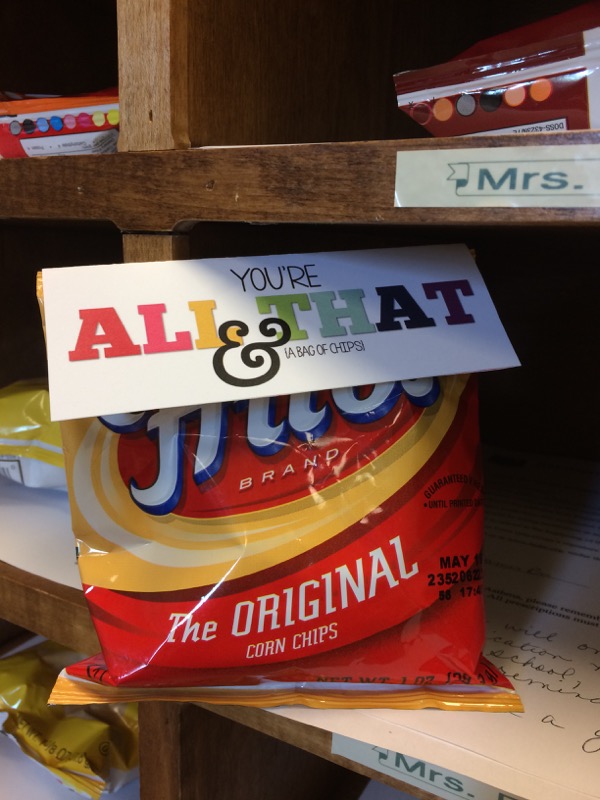 Cute stuff every day. Ramping up to personalized drink cozies.

Today we finished the week with a Coffee Shop (us with a bunch of Krups machines) and donuts. It was really spectacular and I can’t take credit for any of it – my Vice President (and next year’s President) handled the plans for this week while I was stressing about the book fair. Now it’s just Field Day and I can close out my PTO year. YAY.

In other school news, after an email where I copied the superintendent, I finally managed a phone conversation with the Facilities and Maintenance Coordinator. I hung up the phone with more questions and worries than when I said, “Hello.” He did, however, commit to getting me all the fire inspection reports and five years worth of work orders for Bay Minette Elementary. This was…Wednesday maybe? I’ll let you know if I ever see them.

The unfortunate phone call resulted in another letter to the superintendent (I also copied the two people he referred me to originally – one has been responsive one has not) re-asking all my main questions since I didn’t receive any actual answers to them. This resulted in a meeting with the Director of Safety – his real title is actually longer than that – who I had talked to a couple times on the phone about how neither one of us had time for a meeting and met at the school when he was up there one day. He is really nice. And ex-military. So he has a comforting “How Do We Get This Fixed” attitude. He took my complaints and suggestions seriously, and while he has a great poker face, I think he was surprised by some of the things I mentioned. I honestly think they had no idea what was going on in that school. Which honestly gives me the wiggins. I still left that meeting feeling more positive than I had in weeks.

I’m pretty sure the vast majority of the Board of Education has absolutely no idea why I (we really) am still upset and hassling them since everything is getting fixed now, but I think the Director of Safety may get it. It’s awesome that’s everything is getting fixed now. It’s awesome that you didn’t give my kid cancer. It’s not awesome that it got this way. It’s not awesome that it was this way while my child was in school for more than a year and a half. I need the Board of Education to figure out how it got this way, own the severity of the problem and work for lasting change.

Long time Pine Haven resident, Mama Armadillo, was seen in the pre-dawn hours yesterday morning leading this year’s four babies in a parade across the front porch. This afternoon the babies were spotted near the drive way snuffling and rustling in the pine straw at the edge of the woods. 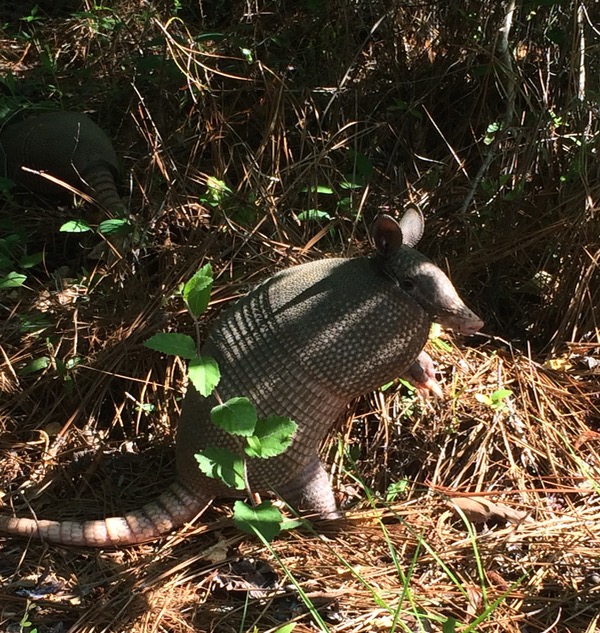 Babies are completely fearless and took time out from serious armadillo business to watch this reporter take pictures of them. Mama was nowhere to be seen.

Current thinking is that they left the burrow without asking.

She (torties are girls) wouldn’t get in the teensy trap we found at Lowe’s this afternoon, but she did manage to make it into the garage. We’ve been leaving the garage door cracked for Tyler, resident mostly-feral, but right now he is asleep on the back porch and didn’t notice her. 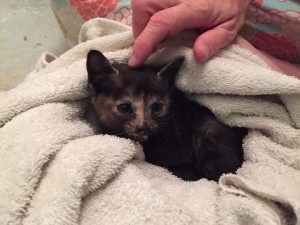 Four-Five weeks do you guess?

We cornered her, gave her kitten milk and now we’re all besties. She’s all situated in the office bathroom sleeping in a kitty cube.

Edited to Add: Teensy Kitty was FIV positive. She likely got it from her mother. FIV and FeLV don’t have to be death sentences for cats. Kittens may show positive on their tests and have only gotten antibodies from their mamas not the actual virus (like a vaccinated cat will show positive). But kittens need to be isolated for 8-12 months to determine if they really are infected. We have no infrastructure in our area to provide infected cats with isolated care. So we have no more teensy kitty and I am very sad. I’m also worried: Teensy Kitty is the first infected cat to show up in our yard in the 12 years we’ve lived here and I hope it’s not a trend. Spay/Neuter and Vaccinate. You’ll save lives.